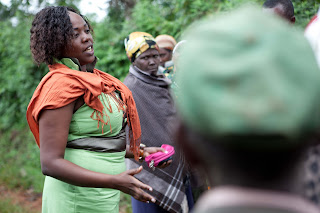 “Women need to have synergy in what they are doing….so that as we try to address challenges and we try to make Kenya a better place, we do it has one.”


When I first met Cathy Irungu in passing on the street, I could feel her wave of confidence and self-assurance from a mile away.  Business owner, second-time candidate, ngo-founder, and citizen mobilizer; these could be the job titles of many people, but Cathy, at only the age of 27 embodies each and every one of these roles.

Starting her first business as the age of 17, Cathy followed in the footsteps of her father who was a farmer and entrepreneur in Nyeri County in Central Kenya.  The lessons she learned as the eldest child in her family translated into skills that she would utilize as a class prefect and later head girl during her early education at D.E.B. Ndimaini Primary School and Muruguru Girls High School.

When she left her village to study biochemistry and molecular biology at Jomo Kenyatta University of Agriculture and Technology(JKUAT), she subsequently discovered her intuitive talent for political engagement when she became a student leader in university government.  It was also during her formidable period in her life that she became involved in national political campaigning and the party system. Unlike many of her peers, who saw their university educations as a ticket for finding a job to work for someone else, Cathy challenged the norm by forging her own pathway as an entrepreneur, problem solver and candidate for office.

Her life-long observation of the environmental, social and cultural barriers that challenged farmers in her village of Ndimaini from reaching their greatest economic potential lead her to start the African Food Security & Environmental Program (AFSEP).  Cathy also saw the need for educated young people to have a platform for connecting their ideas to those who could fund and implement them, and become the Kenya representative for Infospring---an online resource for development professionals and members of the community to exchange solutions for complex challenges. With a strong business background and a desire to help other women, she co-founded the Kenyan Women Chamber of Commerce (KWCC).

When Cathy began her quest for office as a candidate for Parliament in 2007, she saw it as a starting point for her role in governance----the place where she could bring the greatest positive change for her village and the people of Nyeri County that she cared so much about.  Although she knew she was young, she embraced the call to office:  “I’ll start right now. I’ll go for it!  I will not wait until I’m 30.  I will not wait until I’m 35.”

Cathy is among the many women in Kenya who tirelessly campaigned for the implementation of Kenya’s new constitution in 2010.  Among other rights such as landownership, women gained access to political leadership in the New Constitution by way of a new rule that says that no more than any gender can occupy more than 2/3rds of elected or appointed office and new Women Representative seats in each county.  In light of these positive changes, Cathy has found a window of opportunity to run for county Women Representative in her home of Nyeri County.  This time around she is not only trusted more in her community, but also has a more mature understanding of how to operate her campaign in the context of a the new constitution which encourages women like Cathy to participate in governance.  Cathy’s commitment to engaging other women in leadership and community engagement is evident through the robust Nakuru County Women’s Network and the Nairobi County Women’s Forum , which she regularly mobilizes through civic engagement on issues affecting girls and women in governance. Her grassroots relationships are sure to become a cornerstone of support for her candidacy.

Here are some quick notes from Cathy’s formal video interview (to be posted soon):

5.) Enterprise Development
i. Enhance development of small and Micro enterprises.

6.) Creation of Employment opportunities for the local Youths
i. Through design and implementation of job creation strategies such as addition and trade.
Industrialization, ICT, Value
7.) Enhance Good Governance
i. Through accountability, transparency, Integrity and Gender mainstreaming.

CHALLENGES AS A WOMEN CANDIDATE:
1.) Perceptions as a young, single candidate
i. Gaining acceptance on the ground
2.) Encouraging women to vote for other women
3.) Finding resources for running a campaign
i. “Vote Buying” is common
4.) Historically, the nomination process by parties has not been“Free & Fair”

ADVICE to other YOUNG WOMEN LEADERS
1.)  Build a network of other women running for office
i. There is power in numbers
2.)  Encourage women to support other women…even if in other provinces
3.)  Start Now!!!  Don’t wait to run for office.
3.)  Work with men in your campaign and networks.
5.)  Address real issues affecting your constituents.