My name is Ellie Van Houtte, and I am a young female photographer and creative communications professional from Washington, DC in the United States. 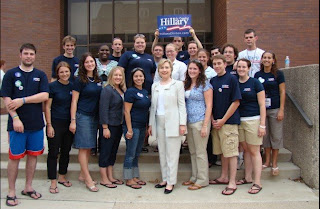 I first became interested in increasing women’s political participation while interning with Congresswomen Marcy Kaptur, the longest serving female representative in the US Congress. Her dedication to her community and addressing the needs of working families inspired me to lead a career focused on finding ways to support women in political and community leadership.

During my early career, I worked on the campaigns of many women candidates, including Hillary Clinton’s 2008 Presidential Campaign. I witnessed the challenges that women candidates faced---including stereotypes about their capabilities, stigmatizing perceptions of how they would balance their political responsibilities with their family and personal life, lack of fundraising skills, and less media coverage than male counterparts. As a photographer, women’s advocate, and creative storyteller, I thought there was something I could do to change the picture.

After meeting Jared Ondieki, the founder of CEPACET (The Center for Partnership and Civic Engagement), an organization that creates programs that help bring social justice, democracy, and peace to vulnerable Kenyan citizens, the Her Story Wins project emerged as a creative way to raise awareness of courageous women running for office and to connect women candidates in the US and Kenya together. The Her Story Wins project will tell the stories of women candidates in a way that dispels the myths associated with political power and highlights the positive influence that women candidates have on their communities. If voters see women candidates first as mothers, caregivers, volunteers and local community leaders---roles that reflect themselves, I am confident that more women will make the decision to vote for female candidates, as well as run for political office themselves.

I hope you will follow the "Her Story Wins" project by email updates from the blog and on twitter.  Beginning in July of 2011, I will be posting regular video interviews and photo slideshows.

Her Story Wins is an independent project and is not affiliated with or funded by any organization, or government.