When I came to Kenya a week ago, I never imagined that my kinship to the 2012 elections and the women candidates running would grow as quickly as it has.  With every new phone conversation, coffee meeting, or impromptu introduction, I become more intrigued by the election process in Kenya and the prospects for women, youth and disability candidates’ inclusion in the government under the new constitution.
My vocabulary is quickly expanding---Merry-Go-Rounds(a common way to pool resources to fund initiatives/projects), Flashing(in reference to how people in Kenya give each other their cell phone numbers), and the intriguing concept of Devolution.  Devolution, or the move from only federal government to one in which 47 new county governments in Kenya will play equally important roles as the parliament, has become the everyday conversation in the news and on the streets.  Not only will Kenya expand the number of elected seats it needs to fill in 2011, but will also be expected to meet the mandates of a  new Constitution. 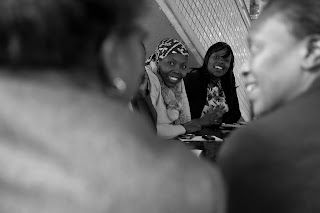 What is unique about the new Kenyan constitution is the special emphasis that it places on ensuring that no gender occupies more than 2/3rds of county or parliamentary seats.  Stipulations in the Constitution create special seats for women, youth and disability candidates.  From the perspective of a young American, this is quite astounding.  These special positions, along with the 2/3rds gender limit, are mobilizing many more women candidates to consider running for office.
With great opportunity, also comes great challenge.  Even with designated seats, women face deceptively difficult cultural and social barriers to getting elected to office in Kenya.  In conversation with both men and women, currently elected and potential candidates, I have learned that winning a seat in parliament or in one of the many new seats created at the county level will take party participation, money and resources, passion for issues that will mobilize voters, and the resilience to weather through the turbulence of the “rough and tumble” campaigns that have in the past rigged candidates out of nominations, inflicted physical violence, and resulted in the “buying of votes”.
Although the above aforementioned challenges are unique, they are not so different from the ones that withhold women in the United States from choosing to run for office.  As caregivers and mothers, we often leave the “dirty” world of politics to the men.  As I have heard repeated many times this week and in other forums, “elected women care about issues and elected men care about power and money.”  If more women were involved in governance in a place in Kenya, perhaps more rural villages would have clean drinking water (the number one priority of rural women), and the halls of Parliament held more accountable to the promises its leaders make to people it is intended to serve.
Over the next five weeks, my journey continues.  More formal video interviews with my initial group of women candidates, a training for young women leaders, as well as a criss-crossing journey across Kenya to visit and photograph the candidates in their  the diverse constituencies.