Running Start: Planting the Seeds of Inspiration for the Next Generation of Women Political Leaders

Running Start is the perfect name for an organization that empowers girls and young women with the confidence, leadership, and political skills they need to have a “head start” as they become change makers, candidates for office, and eventually elected representatives.  Although I have followed and participated in the work of Running Start since its founding in 2007, I had the unique opportunity to document their Young Women’s Political Leadership Program several weeks ago.
Unlike the perceptions one may may infer when they think of a “political training”, the Young Women’s Political Leadership Program was dynamic, engaging, real and inspirational---in fact the diverse gathering of participants were all under the age of 20.  Although the girls expressed the maturity, communications skills and focus of individuals far beyond their age in years, their choruses of conversation and attachment to mobile phones were reminders of their youthfulness.

The girls were not afraid of stating their political ambitions----perhaps reflecting a changing societal attitude towards women’s leadership in elected bodies in the United States.  They were confident of their skills and seemed to embrace the training challenges with audacity. I watched as the girls competitively role-played candidates and donors to raise money, and participated in mock elections with the seriousness of actual candidates----real budgets, consultants, and time constraints.  During their on-camera media trainings, the young leaders faced tough critiques of their interviewing skills as they answered questions from guest communications experts. 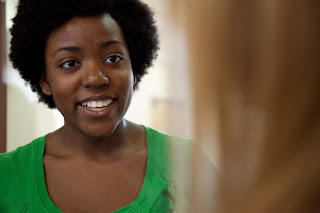 I am optimistic that their energy and commitment to following their passion will spread to you as you check out the above photo slideshow.

If you are a young women or a mentor to a young women interested in politics, I encourage you to learn more about Running Start at http://www.runningstartonline.org.