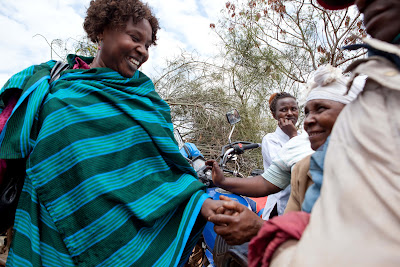 
Mary Paul’s energy is magnetic; the moment that you meet her, you feel like you’ve known her for many years.  Perhaps her energy is derived from her spiritual convictions as a reverend, or her sisterly embrace as an avid advocate of climate change and disaster risk reduction and women’s issues in Kenya as a national leader with many diverse roles, including the Secretary of Women’s Affairs for the Wiper Democratic Movement.

In 2012, Mary is embracing the opportunity to run for County Representative in Ndithini Ward in Machakos County----a dream that may have taken her most of her career to fulfill.

Mary was inspired to engage in politics during her childhood by her Aunt who was a politician and she supported her Aunt’s political campaigns by preparing meals for her supporters. She spent the early portion of her career studying counseling at the university level, working in the Ministry of Planning and later serving as a reverend.  Mary discovered renewed enlightenment in her faith-based work and soon returned to Ndithini Ward in Machakos County to reach out and help marginalized members of the community.

In 2008, she founded an organization named Kyeni Kya Ndithini  (meaning  The Light of Ndithini Village) in Masinga Constituency – Machakos County.  She has since created self-help groups for people with HIV/AIDS, people living with disabilities (PLWD’s), widows, youths and groups that are working on climate change and disaster risk reduction.  Additionally, she has established training programs on entrepreneurship that are supporting the economic independence and autonomy of widowed women and young adults in Machakos County.   Mary believes that “faith in God brings about good change”, and whether by her own faith or a combination of factors including her unfettered will and commitment to making life better for her community, the imprint of her work is clearly evident through the respect that people show her. 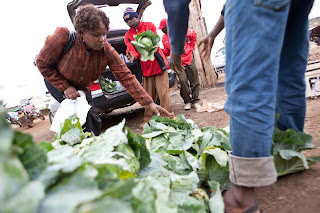 On the day that I join Mary on a community visit in Ndithini Ward in Masinga Constituency – Machakos County, we journey away from the urban buzz of Nairobi by highway, moving through the suburbs and into a landscape marked by diverse agricultural production; from rose farms in hoop houses to fields of pineapple that Delmonte Farm will harvest when in season.  As the air seems cooler in the hills, we see cabbages, carrots and a multitude of fresh produce when we stop at a market in Kenol Town to gather a trunk load of food for delivery to the Children’s Home for orphans at Mananja. 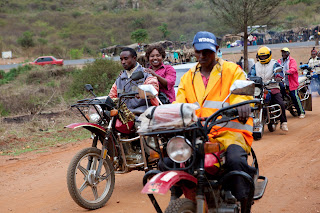 By the time we arrive for our first official stop, a large group of young motorcycle drivers had already gathered at a busy intersection Tumu Tumu stage along Thika Road in anticipation of Mary’s visit.  Although courting motorcycle drivers may seem unusual to politicians in the West, in Kenya, “bodaboda” drivers are an important demographic of young male voters, and also a group of constituents that are eager to listen and be heard by the community. 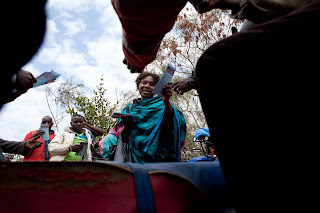 Mary is popular among the group for her work to provide loans to young people who are interested in starting their own motorbike (Bodaboda) business, as well as for advocating for free or reduced cost helmets and gear that could reduce health problems attributed to prolonged dust exposure and casualties caused by roadside accidents.  Through her outreach to this demographic, Mary has not only gained popularity in her constituency, but also found a unique channel for promoting women’s issues.  As the group of motorbike operators circle around Mary to hear her speak, they vigilantly listen to her words and clamor to receive copies of brochure on the rights allocated to women in the new Kenyan constitution. Despite the many cultural obstacles that I witnessed during my visit, I was infused with a sense of optimism when I saw this group of young men embrace the principles of gender equality.  As we departed for our next stop on our community visit, the riders show their camaraderie with Mary by creating a caravan of motorcycles that escort her via motorbike to the next stop of our community visit.

If you have ever walked down a red carpet or escorted royalty through a shouting crowd, you can understand the emotions that overcame me as I ushered Mary Paul to the Tumu Tumu Women’s Group; adorned in their best traditional garb, the women greeted their local hero with song and dance, as they wrapped her with a shawl and moved closer to her.  According to local tradition, this type of greeting is a sign of pride and for Mary, a warm embrace of her leadership and an endorsement of her future aspirations for political office. 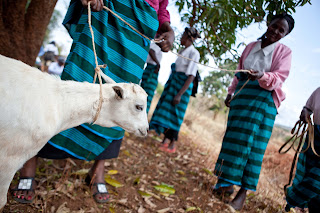 In part due to Mary Paul’s seed money, the participants involved in the Tumu Tumu Women’s Group have been able to create a successful goat raising program that is allowing the women to generate funds to support themselves and pay for school fees for their children.  In the near future the group would like to take the income they are generating to purchase cattle and poultry keeping- which would bring a healthy income to their families.  With new found leadership skills, the women are working together to address their challenges. 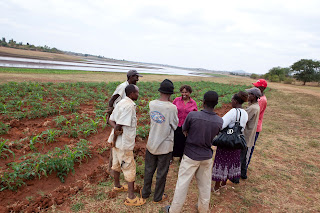 Our day does not end without a stop visit to an agriculture site at Kasuvilo along Masinga Dam where local youths are cultivating corn, watermelons, pawpaw, and tomatoes for a market program---one of many such training programs that are investing in the potential of youths by taking advantage of the local dam (Masinga Dam), by buying water pumps for their agricultural projects.
Supporting children who are orphans are also important to Mary, who regularly donates food and volunteer services to children's homes in Ndithini Ward in Machakos County.  We had a stopover at Ndovoini Children’s Home, athough the orphans were at the homes of the local students as it was a school holiday.  We delivered at least a dozen cabbages, baskets of bread, boxes of cookies and other food to the orphanage.  To see the condition of the beds, wheelchairs and rooms the children live in would cause frustration among anyone who cares about children, and perhaps this is one of the reason that Mary is so invested in making the lives of these youth better---even if only a little bit at a time. 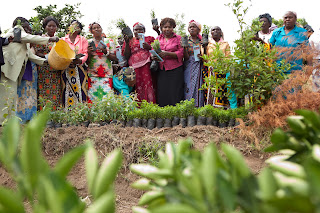 In a perfect finish to our day, we visited the 7 Sisters Women’s Group, a collective of widows who generate income to support themselves from a nursery and tree planting program; Mary is focused on  empowering women and educating the community on climate change and disaster risk reduction.  As seen during our visit with several other groups which she has organized, her positive energy seems to resonate in the women and youth who are uniting themselves together to create opportunities that may seem impossible to achieve as individuals.  Due to the many challenges  for women and youth in the Ndithini Ward in Masinga Constituency , Mary has established a training center in Machakos County. 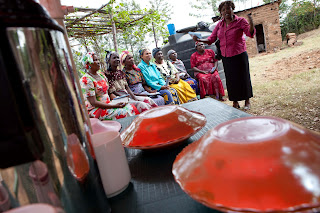 Seeing Mary’s work in action is much better evidence of her potential to win a seat in the County as the County’s first Woman Representative 2012 than any written words can show.  Through her involvement in political training and mentoring programs, including the Women’s Democracy Network (WDN-Kenya), she has built a network of support with other women leaders and political aspirants from across Kenya.  As a women of “heart” and humility in the Kenyan Politics, I have no doubt that more positive work would happen to improve human rights and economic opportunities for the people of Kenya.
ISSUES THAT DRIVE HER VISION FOR OFFICE
1.) Climate Change and |Disaster Risk Reduction
2.)  Improving Infrastructure
3.) Increasing Attention to Health Issues
4.) Empowering Women and Youth
5.) Providing Support to Orphans
ADVICE TO OTHER WOMEN LEADERS
1.) “If you have a dream, bring it to reality”
2.) Doors will open up despite your age.
3.) “Wake up, shout out and share your dreams to inspire others”