MEET THE CANDIDATE: Ms. Emmaculate Musya is Organizing the Women of Kibera 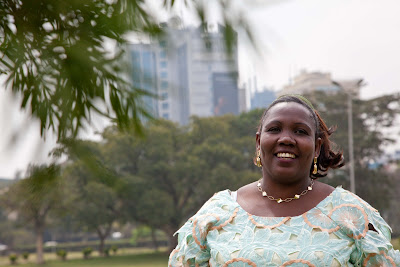 Home is what one makes of it, and home to Emmaculate Musya is the hillsides of the Kibera informal settlement.  As an entrepreneur and community leader, home is not just the small one-room space that serves as her family’s bedroom, kitchen, and a community meeting space for local women, but also the many small hotels, restaurants, beauty salons, and other businesses of Kibera that weave themselves throughout the community and along the railroad tracks that define it. 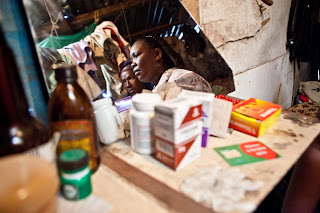 Through her own hard struggles in early life, Emmaculate learned much about how to multiply the little resources one may have into bountiful dividends. Unlike some leaders who only “talk the talk”, Emmaculate “walks the walk” and has results to show for her creative entrepreneurial empowerment efforts.  With the original objective of paying school fees for her children, she started a Chalma for women to collectively pool their resources together.  Although a few shillings a day from a handful of individuals may not seem like much, when 1600 slum women scrimped and saved their spare change, they fundraised through hamrambee (the Kenyan version of putting money in a basket or hat) three million shillings.  When divided up among each other, the money was used not only to pay for school fees, but also to help cover start up costs for small businesses----creating a sustainable legacy. 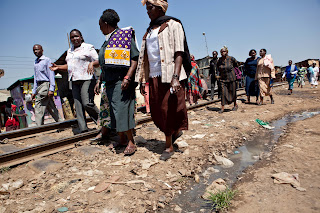 As the elected chair of the Slum Women’s Voice----a constituency of over 10,000 women from various clusters in the slums of Kibera and across Nairobi, Emmaculate has been a formidable figure in mobilizing poor grassroots women to make their voices heard and listened to.  Emmaculate’s organizing skills are impressive, and on the day of our interview she was making phone calls and texting her network of women leaders asking them to engage other activists for an impromptu action of media inundation via mobile phone call-ins on the day that the viability of women’s representation as stated in the new Constitution was to be questioned on parliament floor; the success of her mobilization was visible less than 24-hours later through the tremendous coverage that the topic received on morning radio and tv shows. 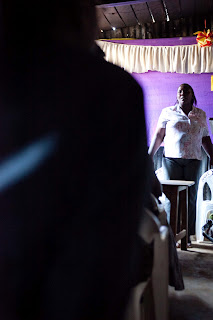 Emmaculate believes that one doesn’t just become a great leader, but must taught to be a good leader and given the opportunity to lead.  She has encouraged leadership by establishing organizations such as the Forum for Women that convenes small groups of about 20 women to practice leadership and plan out strategies for civic engagement.  These small gatherings have not only allowed women the chance to “be present” in decision making, but have also created economic opportunities.  The group that was hosting the meeting I attended during Emmaculate’s community visit had bought a piece of land, created a community space and have generated a consistent source of income generation by renting the space to leaders and groups that need a venue for meetings and other gatherings.  Finding secure and safe locations for people to meet in the informal settlements is challenging, but by creating a much-needed commodity, the women are profiting.

As 54% of the Kibera population, women are the largest demographic and a powerful voice in politics when they run for office and vote for candidates. Emmaculate and organizations including Slum Women’s Voice have provided organizing trainings for women, who now nominate other women to run for office and coordinate election outreach in over eight slum communities in Nairobi.  In fact, in 2007, with the encouragement of her peers, Emmaculate ran for a Council leadership position.   Despite a very strong door-to-door campaign, Emmaculate faced unforeseen roadblocks as she challenged the corrupt Kenyan elections culture of vote buying and seat appointments to friends.  Male politicians felt particularly threatened by the powerful influence she was building in the community and showed resentment that a women could potentially “steal” away their powerful seats in office. In one attempt to deter Emmaculate from completing her campaign, she was lured into the tight confines of a local salon, where she faced interrogation from men who were armed with machetes and knifes.  Not only did they steal all of the money she had, but the men also stripped her naked and threatened to rape her.  Her resolve and fearlessness scared the men from perpetrating her or any others with her, but the experience left an indelible mark on Emmaculate.  It is quite unfortunate that Emmaulate’s campaign challenges in 2007 were not unique; many women candidates from across Kenya faced resistance to their campaigns and even violence during their candidacies. 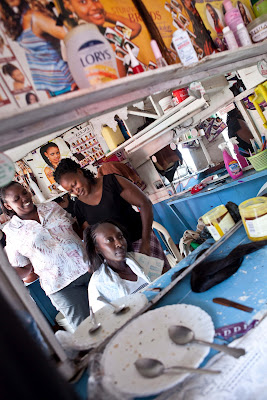 In the years that followed the 2007 elections Emmaculate and other women activists have benefited from the opportunities set forth in the new constitution and have been teaching other women to refuse a candidate at their door if they are not open to supporting issues that impact women and families.  In 2012, Emmaculate is running for Women County Representative in Nairobi County, and is confident in her opportunity for success.  Actively involved in the leadership of the ODM party, and organized financially, she is equipped to win her race this year.  Her passion for bringing positive change to her community is evident in the strength of her voice as she commands a room of women leaders with great respect.  If she continues to educate her legions of on-the-ground grassroots women with the message that “ your vote is your right.  Your vote is your life, “  2012 could be an exciting year for not only Emmaculate, but also all of the women of Kibera who can take pride in having genuine voice and representation in the national Kenyan Parliament.

ADVICE TO OTHER YOUNG WOMEN LEADERS
1.) Take advantage of opportunities for education
2.) You can be anyone
3.) Our Position is where we are…..come out with other women and let your voice be heard.