MEET THE CANDIDATE: Beatrice Karore is Inspiring the Women of Starehe to Dream Bigger 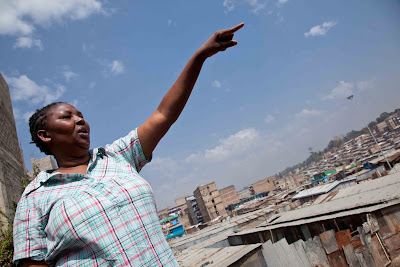 Ms. Beatrice Karore stands with great pride as she gestures across a sea of tin roofs from a hilltop on the far edge of her home village of Mathare.  Although the landscape of tv antennas, clotheslines, and homes of earth & tin sheets in Mathare may not be like the glass and concrete high rises of Nairobi’s business center, like the ocean floor, this informal settlement (more commonly referred to as a slum) of nearly ½ million residents is much more complex and vibrant when one explores what flourishes below the surface.

As we weave our way down into the Mathere Valley, a community of ten distinctive villages defined by tribal origins, Beatrice navigates her way through a maze of small pathways teeming with trash and water runoff. We cross one of only three footbridges that connect the villages together across the Mathere River, as children play and women wait in line with yellow plastic jerry cans to collect water for their homes. At every turn we make, Beatrice encounters familiar faces that are eager to greet her and to share the latest news and community concerns with her. 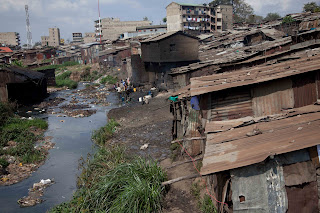 As I quickly observe, the community has many unique challenges: landlessness, lack of access to clean drinking water & electricity, high youth unemployment, security concerns and higher than normal rates of poverty. During the 35 years that Beatrice has lived and raised her family in Mathere, she has not only experienced many of these challenges, but also found windows of opportunity to overcome them through leadership. 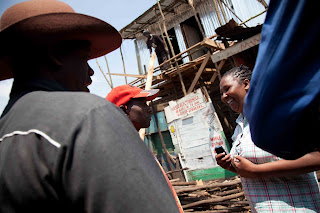 As a recognized leader within the Bunge La Wamama (or Women’s Parliament), Beatrice has empowered local women to stand up for themselves and to think collectively about coming up with solutions to the problems around them.  As a group of about 25 women gather with Beatrice for a meeting to discuss how to recruit women leaders to run for office in 2012, they sip tea and highlight the achievements that women leaders have made so far. A newly opened community resource center has consolidated services to make resources like childcare, health services, and the internet available in one place.  The new resource center also includes a laundry farm and safe baby care service for working mothers; both of these programs have created economic opportunities for underemployed women.  As the meeting comes to a close, the group expresses their excitement for her candidacy for a civic seat on the Nairobi County Assembly by eagerly giving her their names and mobile numbers so that she can mobilize them as members of her campaign team.

Her desire to create positive changes in Kenya may be rooted in the unfortunate injustices and inequity that have and continue to be perpetuated in her community. In the aftermath of the 2007 elections, many vigilante groups and the Mungiki incited violence with police authorities that resulted in widespread destruction of many homes and businesses as well as the killing of 22 men and boys along Biashira Street, a main business corridor that sits at the heart of the community.  In appearance only, you would not detect that such crimes have taken place, but for the mothers and wives who were left widowed by these killings, their struggle to support their families is a constant reminder of an irreplaceable loss in their lives. 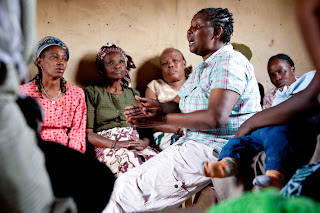 Many widowed women in the Mathere settlement earn their livings as casual workers--day laborers who are hired to wash clothes, clean homes, and sometimes even to prepare dead bodies for funerals by wealthier dwellers in neighboring communities.  A day’s wage for such work may be as little as 100 ksh(about $1.12), and frequently women are denied promised pay and may encounter sexual and physical harassment by clients.  Sexual and physical violations of women are often ignored by local authorities, and Beatrice has worked with the Mathere Gender Defenders to create a safe space for women to find help in the face of adversity--whether legal, financial, medical or emotional support. In her leadership role within the Bunge La Wamama, she has been able to impact great change in her local community.  She is helping casual workers apply for economic development grants for starting their own businesses, as well as working to empower the women to “talk for themselves” by forming women-run union in the slums.

Beatrice is poised and ready to take her leadership to the next level as a representative to the Nairobi County Assembly.  As the recently elected coordinator for the Bunge La Mwananchi (the People’s Parliament), she has already been planting roots in important grassroots networks, as well as establishing herself as a leader who is capable of creatively solving even greater challenges.  Although there are many male leaders who will vie for the role of the Starehe Civic Seat, as a mother of young children and a venerated community organizer, Beatrice is able to build the trust of women---a key demographic that if educated and mobilized can help her win the election.  She may not have piles of cash at her disposal, but her genuine commitment to empowering her Kenyan sisters and her trustworthiness are attributes that make her a rising star in Nairobi politics.  Her strength may be the catalyst for inspiring other women in the Mathere slums to dream bigger than their imaginations allow.

ISSUES THAT DRIVE HER VISION for OFFICE
1.) Land Ownership for the People of Mathare
2.) Elevating the Community out of Poverty & Improve the Economic Potential of Women
-Bring more opportunities for youth and women businesses
-Increase access to education
-Bring electricity to community to improve security and safety
3.) Empower Women to take Leadership
-Organize Trainings
-Collect data on issues affecting the community
-Build resource centers

ADVICE TO OTHER YOUNG WOMEN LEADERS
1.) Love Each Other: Recognize the Potential of Young Women
-Find mentor(s) that encourage you to leadership
-Bring strong women to politics that “have what it takes to win”
2.) Network Together
-Create bridges across class and backgrounds
-Problem solve together
-Create round tables for raising funds
-Build support systems that foster each others’ strengths
3.) Empower Women Against Exploitation
-Help women stop rape, gender based violence, pay inequity, etc.
4.) VOTE for Women