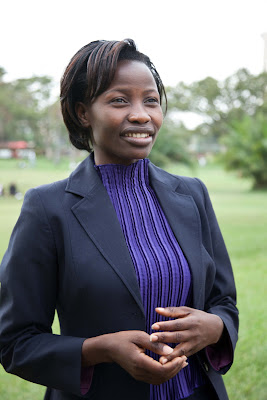 The experience of traveling to Maduwa Island---an isolated community that exists with no electricity, limited communications, no flush toilets and the constant threat of flooding, is analogous to the journey that Ms. Susan Mang’eni may face during her 2012 campaign for a seat in the Kenyan Senate.

Reaching Maduwa Island Primary School is not easy.  Propelled only by a small, single motor wooden boat---no life vests, nor safety measures, Susan, members of the Kenyan Youth Development Enterprise Fund team, their guests, and several school children, ride precariously down the River Yala and across Lake Victoria. The trip is not for the faint of heart or for those who cannot swim! As we approach the island, we meander through groves of papyrus trees and marshes, and past small pastures spotted with grass huts made of earth walls and thatch roofing that seems bizarrely out of context when surrounded by floating plants, birds, turtles, and barely discernible channels of water.  As the passageways are too narrow and curvaceous to move a fully occupied boat forward, we evacuate the boat and wade knee deep in sinewy water several times before reaching the island.

The teachers, students and parents of the Maduwa Island Primary School are ecstatic about Susan’s visit to the island---a journey that none of her political opponents have traveled.  Her words of inspiration are embraced with as much gratitude as the solar lamps that she purchased for the school that are enabling students to study after the daylight fades. As we pass a boat of local residents on our departure from the island, the passengers chant “Susan for Senate”,  evidence that small gestures of care can pay big dividends.

During my two day visit shadowing Susan in Busia County as a community leader and candidate for Senate in 2012, I witnessed her strength as a confident, yet responsive leader. She is respectful and humble before community influentials, yet assertive enough to take ownership of her accomplishments in front of audiences that are skeptical of politicians.  With her campaign team in tow, we travelled across her district for campaign engagement opportunities that ranged from a Sunday morning sermon during the weekly youth service at Katoda Kituroi Church in Chakol Parish of the St. Monica Chakol Girls High school that she attended, to field visits to youth agriculture and small-business projects (as diverse as rocket stoves and theater arts), and even impromptu information gathering conversations with fishermen in Port Victoria.  Even in the uncomfortable role of collecting money from strangers at a public Harambee (a traditional Kenyan fundraising drive), Susan remains poised.

Although Susan is one of the strongest, and most strategic organizers I have met, her quest for one of Kenya’s 47 newly created Senate seats in the National Assembly as a young, single, female candidate may be challenged by the social and cultural realities that have historically faced women vying for office in Kenya. Most people expect older, wealthy and well-established male leaders to run for national elected offices, and Susan’s entry into the race breaks many stereotypes and will test the ability of the voters to elect public leaders on their skills and ideas, and not on their gender, family backgrounds, or tribal affiliations.

Susan’s roots in public leadership were planted as a child in Funyula in Busia county.  While attending primary school in the Teso District, classmates began calling her by the nickname of “politi” because of her thirst for debating social issues.   Her love for debate and politics grew as she entered the University, where she was soon presented with the opportunity to become actively engaged in politics and to meet women leaders, including Honorable Julia Ojiambo. During the 2007 elections, Susan had the opportunity to travel across Kenya to champion youth issues on the Presidential campaign. She quickly learned the rules of the political game, and begins charting her own pathway to leadership.

Deciding to run for office in Kenya takes tenacity, but this decision seems like an inevitable one for a bold and visionary leader like Susan, who is comfortable traveling on a road that has never been travelled before. The 2012 elections present an opportunity for Susan to leverage the networks she has created as the Director of the Youth Enterprise Development Fund to “give back” to her community and to become a positive agent for change in government. Although Susan is passionate about mobilizing young people in Busia County and across Kenya with the skills and opportunities they need to find economic independence, she recognizes many challenges in the community that could be solved by good leadership in government.  As we drive through Busia County, Susan keenly observes the fertility of the land and waterways, and how small investments in greenhouses, irrigation systems, cultivation training for farmers, and better market opportunities could help increase agricultural productivity.  With so much richness in her community, she knows that no person in Busia County, or anywhere in Kenya should go hungry or be living in poverty.

Unlike many of her predecessors, who have perpetuated practices that contribute to Kenya’s corrupt political system, Susan hopes to win genuine support and votes for her election through grassroots civic engagement and the economic empowerment of young people. Even though the 2012 elections are over a year away, she is beginning to build community visibility early and making herself accessible through direct interaction with the voters of Busia County---a county in Western Kenya that borders Uganda. With a background as a national youth organizer, and extensive leadership and campaign training through organizations that include the United States International Leaders’ Visitor Program (IVLP 2011) and the Women’s Democracy Network, Susan is preparing a far-reaching campaign that includes building a strong network of on-the-ground ombudsman that will help her progress towards a win next year.

ISSUES THAT DRIVE HER VISION for OFFICE
1.) Development of Human Capital
2.) Increase Agricultural Productivity in the county by giving farming a commercial perspective.
3.  Health and Sanitation conditions
ADVICE TO OTHER YOUNG WOMEN LEADERS
1.) Come Out to Participate in Politics
2.) Quality matters over Quantity
3.) Use Your Intuition & Experiences as a Young Women to Create Solutions